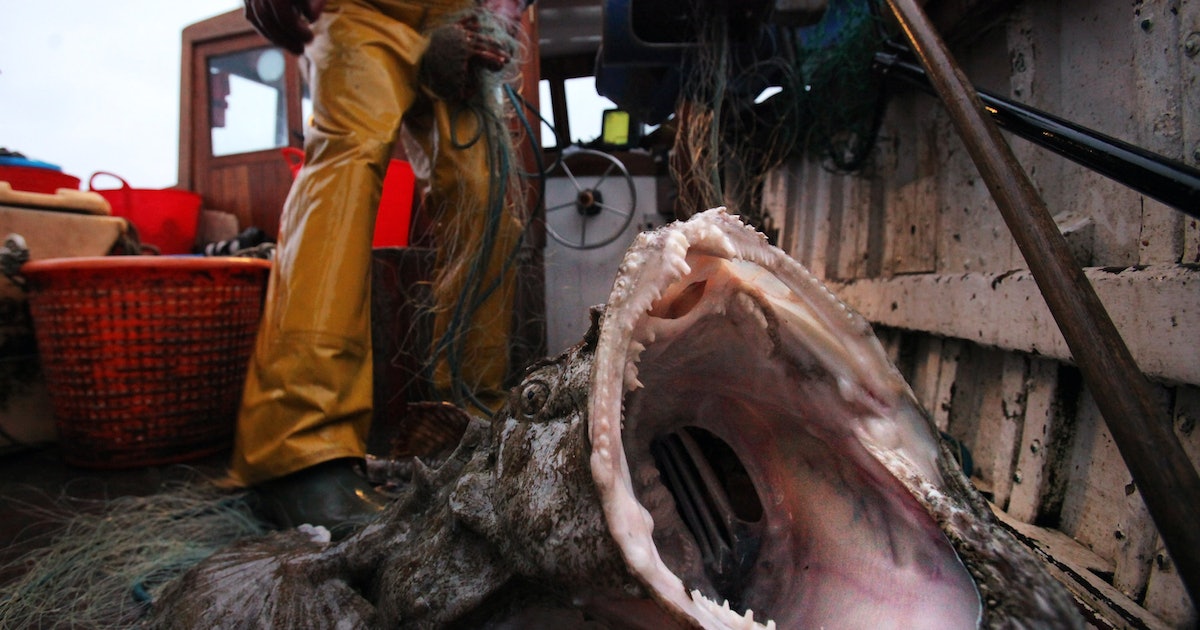 There’s a whole lot to be afraid of in the depths of the sea where the sunlight barely reaches. It’s an unforgiving terrain and houses creatures that are just as intense, including fish resembling skulls like the Northern Stargazer and bug-like crustaceans like the Giant Isopod. These 15 terrifying things in the ocean primarily live along the floor, where some have waited centuries to be discovered by scientists. It certainly takes an incredible animal to survive water pressure as high as eight tons per square inch, and these animals do it with an appearance that’s just as brutal to match.

Scientists are still actively discovering what lies beneath the world’s oceans. The deepest point is in the Pacific Ocean in the Mariana Trench, a section of earth that spans more than 1,500 miles. At its lowest point — the Challenger Deep section of the trench — the ocean floor sits more than 36,000 feet below sea level, a height that scales the summit of Mount Everest plus another 7,000 feet. Scientists have yet to garner more information about the animals living in that section of the ocean floor other than the fact that sea cucumbers can survive there. If this list of scary deep sea creatures is any indication, what will be discovered could be just as terrifying if not even more frightening.

The Sarcastic Fringehead appears relatively harmless when it isn’t provoked and actually possesses no threat to humans whatsoever. However, when this footlong fish is agitated, it will open its massive mouth in an attempt to fend off predators. It’s that defense tactic that is both surprising and frightening.

Found in the eastern United States, the Northern Stargazer burrows itself in the sand to camouflage. When unsuspecting prey comes near, the fish electrically shocks it into submission. This fish is not just painful to look at, but actually a painful animal to encounter.

Thought to be a mere legend and not an actual animal, the Giant Squid was only recently discovered and captured by scientists in 2006. Giant Squids are exactly as large as their name implies, with eyeballs 10 inches in diameter and weighing up to 440 pounds.

Only the female Black Dragonfish has the frightening appearance of an alien-like creature with razor-sharp teeth. The animal lives deep under the ocean and can even produce its own light, making it impossible not to notice it.

As their name indicates, Gulper Eels have massive mouths. The lengthy deep sea creatures can swallow prey whole for that very reason. The animal is so adept at eating large objects that its mouth and its stomach expand to accommodate food.

The Fangtooth Fish is another deep sea dweller with a name to match its apperance. Its teeth are disproportionately large compared to its overall frame, making a perfect prison cell for prey after being sucked into its mouth.

The most terrifying part about the Frilled Shark is its massive rows and rows of teeth spanning a total of 300 individual teeth across 25 rows. Frilled Sharks can grow up to six feet in length and are said to constrict their prey like snakes.

Giant Isopods may not be related to insects but they share a shocking resemblance to pill bugs. The massive crustaceans can grow up to two and a half feet in length, which is scary in itself. They’re otherwise harmless, found at the bottom of the ocean, and feast on other deep sea animals that are already dead.

Goblin Sharks get their name from, well, looking pretty ghastly. The deep sea animal uses its ugly appearance to its advantage, sensing prey with its snout and stabbing its catch with its thin, sharp teeth.

Vampire Squids are surprisingly docile animals that don’t even ink or suck the blood of their prey. The scariest part about the animal is simply its unconventional appearance and umbrella-like tentacles.

Described by Business Insider as a “creepy-looking fish,” the Snaggletooth is another deep sea fish with a fairly self-explanatory name. Its teeth are slightly hooked, helping to snag prey. Snaggletooths can grow up to two feet long, though there are a wide variety of species that don’t get quite as large.

Grenadiers are surprisingly common and live all across the ocean, albeit in depths of up to 1,000 meters. The fish emits a strong odor due to high levels of Trimethylamine oxide, or TMAO, an amino that typically give fish its pungent smell.

Black Swallowers may be tied for most gluttonous with the Gulper Eel. Whereas the Gulper Eel can simply swallow prey whole and let its stomach expand and immediately begin digestion, Black Swallowers can gorge themselves on animals so large that they take time decomposing inside the fish itself.

The Barreleye sees all. This deep sea fish is transparent and has the ability to move its eyes all the way around to view what’s going on behind it. Yet another deep sea fish, the Barreleye shares a commonality with many of the other sea creatures on this list in that it simply engulfs its prey fully.