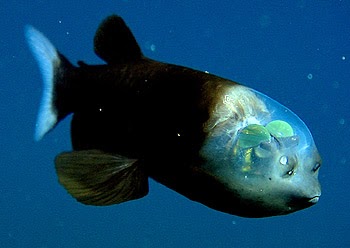 There are actually several fish species that fall under the name “Barreleye,” but today we’re just going to focus on

, an incredible looking deep-sea fish that has a transparent head!

Researchers at the Monterey Bay Aquarium in California have been studying these strange looking fish, which were first described in 1939, and they believe they have discovered how they live and behave. Barreleye have two large, barrel-shaped eyes that are visible through their transparent head domes. These eyes are able to move in different directions, enabling the fish to look at what is directly above their heads, and also what is in front of them.

Because they live at depths of around 2,500ft (762m) down, there is very little light. It is speculated that the Barreleye fish use their large, flat fines to remain motionless in the water, and fix their eyes upward. The green pigments in their eyes might help them to filter out any sunlight that reaches down into the water, allowing them to more easily locate the bioluminescent glows of various jellyfish and other creatures. When prey has been found they then swim upwards, moving their eyes into a forward position.

There is still much to learn about the Barreleye and many other deep sea denizens. Just image what else is down there, new things are discovered all the time!