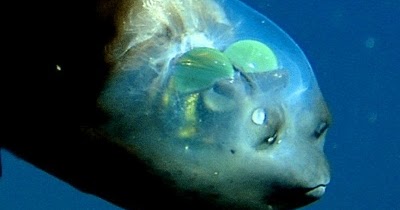 These fish are named for their barrel-shaped, tubular eyes which are generally directed upwards to detect the silhouettes of available prey; however, according to Robison and Reisenbichler these fish are capable of directing their eyes forward as well. The family name Opisthoproctidae is derived from the Greek words opisthe (“behind”) and proktos (“anus”). 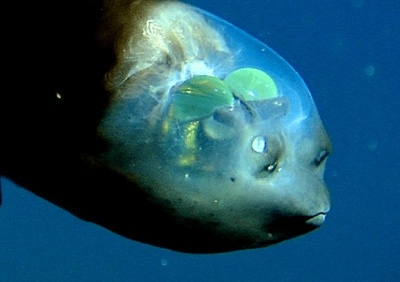 Although this fish’s existence has been known for quite some time, it was only this year that scientists fully understood how bizarre it is. These fish have a mostly black body with a transparent head (which was unheard of until recently, since it always shattered while the fish was being brought up to the surface). Although it has two indentions in the front of its head, those are NOT its eyes: its eyes are the green spheres in its transparent head. These eyes can be used to look above for food or look forward when it is stalking its prey. 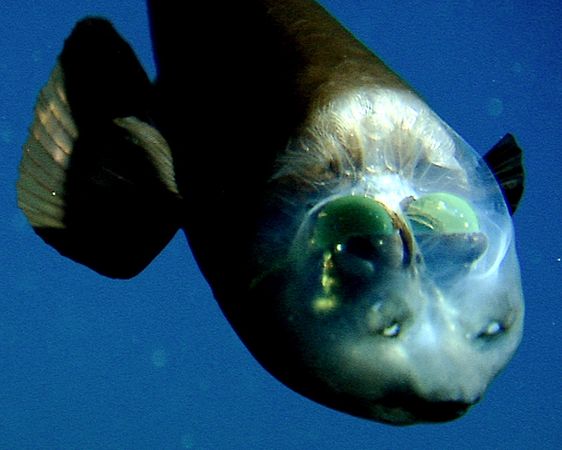 All species have large, telescoping eyes which dominate and protrude from the skull, but are enclosed within a large transparent dome of soft tissue. These eyes generally gaze upwards, but can also be directed forwards. The opisthoproctid eye has a large lens and a retina with an exceptionally high complement of rod cells and a high density of rhodopsin (the “visual purple” pigment); there are no cone cells. To better serve their vision, barreleyes have large, dome-shaped transparent heads; this presumably allows the eyes to collect even more incident light and likely protects the sensitive eyes from the nematocyst (stinging cells) of the siphonophores from which it is believed the Barreleye steals food. It may also serve as an accessory lens (modulated by intrinsic or peripheral muscles), or refracts light with an index very close to seawater. A recent study disclosed that Dolichopteryx longipes is the only vertebrate known to use a mirror (as well as a lens) in its eyes for focusing images.

The toothless mouth is small and terminal, ending in a pointed snout. As in related families (e.g. Argentinidae), there is an epibranchial or crumenal organ present behind the fourth gill arch. This organ—analogous to the gizzard—consists of a small diverticulum (pouch) wherein the gill rakers insert and interdigitate for the purpose of grinding up ingested material. The living body of most species is a dark brown covered in large, silvery imbricate scales; but these are absent in Dolichopteryx, leaving the body itself a transparent white. In all species a variable number of dark melanophores colour the muzzle, ventral surface, and midline.

Also present in Dolichopteryx, Opisthoproctus, and Winteria species are a number of luminous organs; in Dolichopteryx there are several along the length of the belly, and in Opisthoproctus there is a single organ in the form of a rectal pouch. These organs glow with a weak light due to the presence of symbiotic bioluminescent bacteria; specifically, Photobacterium phosphoreum (family Vibrionaceae). The ventral surface of Opisthoproctus species is characterised by a flattened and projecting sole; in the mirrorbelly (Opisthoproctus grimaldii) and Opisthoproctus soleatus this sole may act as a reflector, by directing the emitted light downwards. The strains of P. phosphoreum present in the two Opisthoproctus species have been isolated and cultured in the lab. Through restriction fragment length polymorphism analysis, the two strains have been shown to differ only slightly.

Barreleyes inhabit moderate depths, from the mesopelagic to bathypelagic zone, ca. 400–2,500 metres down. They are presumably solitary and do not undergo diel vertical migrations; instead, barreleyes remain just below the limit of light penetration and use their sensitive, upward-pointing tubular eyes—adapted for enhanced binocular vision at the expense of lateral vision—to survey the waters above. The high number of rods in their eyes’ retinae allows barreleyes to resolve the silhouettes of objects overhead in the faintest of ambient light (and to accurately distinguish bioluminescent light from ambient light), and their binocular vision allows the fish to accurately track and hone in on small zooplankton such as hydroids, copepods, and other pelagic crustaceans. The distribution of some species coincides with the isohaline and isotherm layers of the ocean; for example, in Opisthoproctus soleatus upper distribution limits coincide with the 400-metre isotherm for 8°C.

What little is known of barreleye reproduction indicates they are pelagic spawners; that is, eggs and sperm are released en masse directly into the water. The fertilized eggs are buoyant and planktonic; the larvae and juveniles drift with the currents—likely at much shallower depths than the adults—and upon metamorphosis into adult form they descend to deeper waters. Dolichopteryx species are noted for their paedomorphic features, the result of neoteny (the retention of larval characteristics).

The bioluminescent organs of Dolichopteryx and Opisthoproctus, together with the reflective soles of the latter, may serve as camouflage in the form of counterillumination. This predator avoidance strategy involves the use of ventral light to break up the fishes’ silhouettes, so that (when viewed from below) they blend in with the ambient light from above. Counterillumination is also seen in several other unrelated deep-sea families, which include the marine hatchetfish (Sternoptychidae). Also found in marine hatchetfish and other unrelated families are tubular eyes; cf. telescopefish, tube-eye.

See If You Can Identify All of These Dangerous Sea Creatures

Which Fish Live in the Hadal Zone?