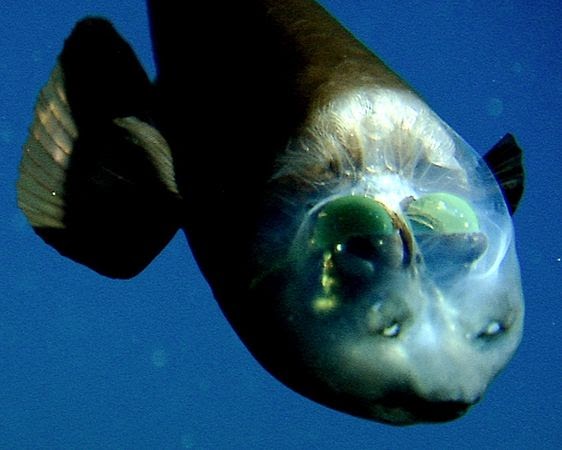 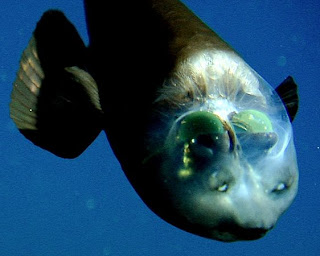 The mysteries of the depths of the ocean never cease to amaze me. With so much unknown, imagination tends to take over. The species that could be living so far under the water’s surface are still only beginning to be discovered. One of these unique and mysterious fish is the Macropinna microstoma, also known as the Barreleye.

About 2,000 feet below the surface, it lives in almost complete darkness over in the Pacific Ocean. However, there is something different about this fish than most others (of the ones we know of): its head is transparent. This fish, small with a black body, has a completely see-through head region.

Looking at it, there are 2 black circles right above its mouth that appear to be eyes; surprisingly, they are not. Those are the olfactory organs, or organs used for the sense of smell. The 2 barrel-like structures (gray with green half-spheres on top) within the head are the actual eyes of this fish. Being as the eyes are inside of the head, this would explain why the fish’s head is transparent and not the rest of the body. The gray part is the actual color, while the green is a protective cover. Being so far deep into the ocean, where little light reaches, the eyes of the barreleye fish are very sensitive to even the smallest amount of light.

Another interesting fact: the eyes of this fish move together, like binoculars, unlike most other fish. Most often, the eyes point upward, but when it locates food it rotates its eyes to face the same direction as its mouth, to make capturing the food much easier. 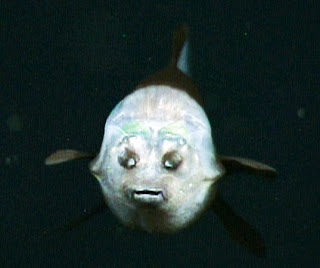 This unique creature of the deep has been known of since 1939; however the only known specimens had been mangled up remains after being captured by fish nets in the ocean. When those remains were taken out of the nets, the heads of the fish were often found to have collapsed on themselves. Not until 2004 was any video footage of this fish captured, and this was not released until 2009 by the Monterey Bay Aquarium Research Institute. To see the video of the barreleye fish that was released by the research institute, click here.

Not much else is known about this strange species of fish, considering how difficult it is to study. At such far depths, with little light, and with the fragility of the structures to change in pressure, it may be long before we know more about this mysterious fish.

But what could be the reason for the way this fish’s head has formed? After all, there had to have been some evolutionary benefit for the original placement of the eyes within the head, and from that the transparency of the head, right? It seems having the eyes located there allows more protection, especially in a place where there is very little light. Also, having the eyes located in the head allows for a wider range of rotation for the eyes, and makes it easier to go from looking above to straight forward.

With so much still unknown, so much is still only assumed. Can you just imagine what other creatures exist that we know nothing about? I guess we will just have to wait and see.

Macropinna microstoma: A deep-sea fish with a transparent head and tubular eyes