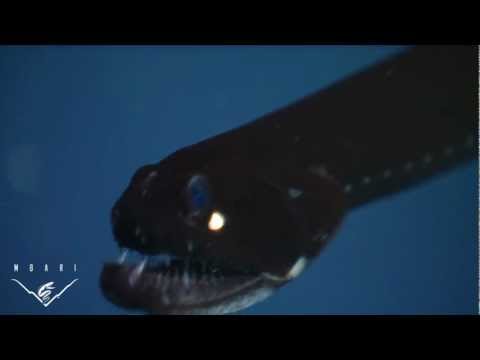 The black dragonfish — Idiacanthus atlanticus — is a rather strange-looking, long and slender fish that lives in the mesopelagic and bathypelagic waters of the world’s oceans, typically being found at depths of between 5000-7000 feet.

Among the species more notable qualities are its distinct looking long fang-like teeth, its bioluminescence, its bizarre method of sexual reproduction, and its method of hunting. And also the fact that it greatly resembles the alien from the movie Alien (as the images below show).

Some of the more interesting qualities of the species are detailed below:

– Like many of the fish that live within the deeper layers of the ocean, the black dragonfish can produce its own light. In contrast to nearly any other species, though, the black dragonfish can produce light in the red/infrared range, as well as in the blue/green range that most other deep sea fish do. This gives the species the enormous advantage of being able to provide light for itself that most other species can’t perceive — as infrared isn’t visible to most animals.

– The species is covered in photophores all along its lower and upper surfaces, and also possesses photophores under its eyes and at the terminus of its long barbel. When the animal is threatened/disturbed these photophores all light up.

– The species possesses one of the strangest and most extreme cases of sexual dimorphism in the whole of the animal kingdom. The females usually reach sizes of about 40cm long, while the males only grow to be about 5cm. Male dragonfish also do not possess a functioning digestive system, teeth of any kind, or any of the other defining characteristics of the females of the species — it appears that their sole function in life is reproduction.

– The larval form of the fish is quite strange — the eyes nearly detach from the rest of the body, being located at the ends of long flexible stalks that are nearly the length of the larval forms whole body. These then slowly retreat into the skull of the fish as it develops.

– The species hunts with the aid of a bright luminescent barbel lure located on its chin — the fish uses this lure to attract prey which have mistaken the lure for a small meal.

James Ayre’s background is predominantly in geopolitics and history, but he has an obsessive interest in pretty much everything. After an early life spent in the Imperial Free City of Dortmund, James followed the river Ruhr to Cofbuokheim, where he attended the University of Astnide. And where he also briefly considered entering the coal mining business. He currently writes for a living, on a broad variety of subjects, ranging from science, to politics, to military history, to renewable energy. You can follow his work on Google+.

The Most Toxic Fish That You Should Avoid