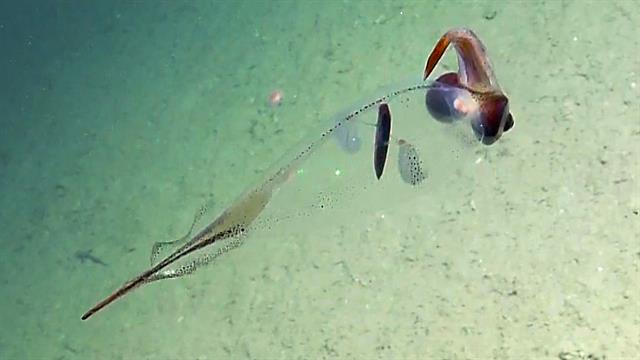 The mysterious, gelatinous animal was pulled up from the ocean deep.

The mysterious, gelatinous animal was pulled up from the ocean deep.

Scientists in Australia studying never-before-explored parts of the ocean discovered a fish that appears faceless—a species that was only seen once before, over a century ago.

The fish, which was first found off the coast of Papua New Guinea in 1873, was spotted a second time during the scientists’ expedition near Australia’s eastern seaboard, 2.5 miles below the ocean surface. It doesn’t have any eyes, and its mouth is underneath its body, giving it the appearance of not having a face.

The team of Australian government scientists studying these unexplored areas of the ocean—on a month-long voyage of the Investigator—uses nets, sonar, and deep-sea cameras to identify many new species. They have found bright red spiky rock crabs, coffinfish, blind sea spiders, and deep-sea eels since they set out on May 15.

Several thousand specimens have been retrieved so far, and there are still two weeks left in the trip. Tim O’Hara, the ship’s chief scientist, told Agence France-Presse that about one-third of what the scientists have found are new species.

In the dark, deep ocean fish are usually gelatinous and often lack eyes. Some even create their own light through bioluminescence.

The “faceless” fish that the crew found has two spots on its head that could be nostrils. It’s reminiscent of the barreleye fish, another creature found deep in the ocean, which has nostrils that look like eyes.