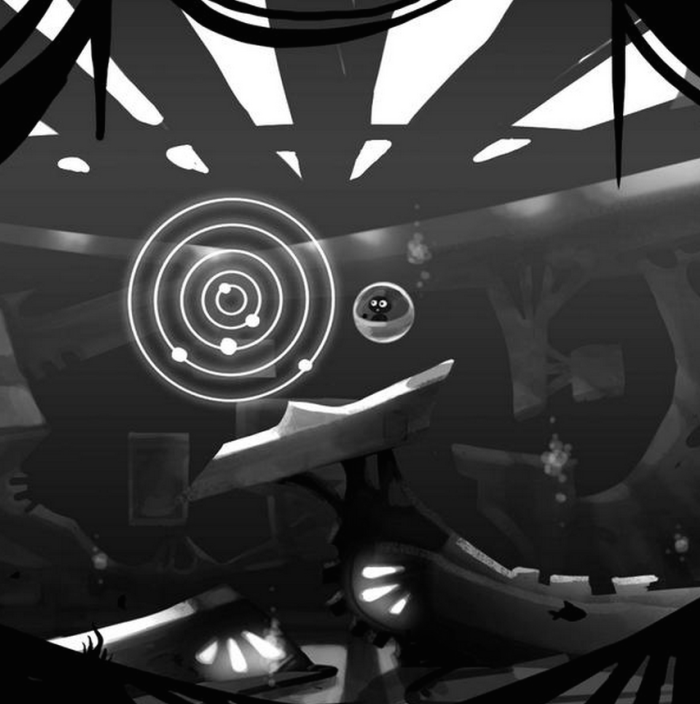 Mission Atlantis Island is the 40th island on Poptropica. It is also the second island to be released in episodes.

Episode 1: Into the Deep

Episode 2: Fortress of the Deep

Episode 3: Out of the Blue

Episode 1: Into the Deep

You’re on a boat. Talk to the dude next to the giant crate in the water, Cam Jameson, and he’ll tell you that he lost the keys to his submarine and that he needs the submarine in order to hunt down and film some fish for his new movie.

The man with the red beard has the keys, but he’s not giving them up that easily. Jump up to the platform above him and click the bucket, spilling water all over him. He’s annoyed, but doesn’t lose his grip on those keys! You get the bucket, though.

Jump down and find the octopus. The octopus will squirt ink at you if you click on it, so do that for a bucket full of ink. Then go back up to the platform where you threw the water and use the ink bucket. The man will get ink on his helmet and in his eyes. He drops the keys.

Grab them, and return to the crazy filmmaker. He, of course, will make you get in the submarine and film the fish for him. He’ll hand you files about the fish and then you’ll have to get down there.

First thing you see is a seadragon! Click on it and keep it in the frame for the perfect roll of film.

Next, we go for the cuttlefish! These squid-like critters are very shy and like to hide behind coral. The red ones are common, but the purple one is rare—we’re going for that one. Go up to the fish to scare them into moving. Move each red fish short distances to inch the purple one up to the red coral, where we can see it. Click on it and stay still to get your shot!

The Fish and The Fishious: Stonefish Drift

Head down to the floor and you’ll find the stonefish, a poisonous fish that looks like a stone. To get it to come out, you’ll have to hide in the yellow coral beside you. When it comes out, click it to get footage!

If you head to your left, you can see the creepy barreleye fish inside a rock passage that you can’t get into. You have to force it out using the deep-sea vents. Click on each vent from left to right, top to bottom, to force the fish into the open, and click for a picture.

Fishy Fisher and the Order of the Anglerfish

Travel into the room to the far left and collect the red fish. Travel to a corner in the cave-ish place and lure out the Anglerfish.

On your way back to the surface, you spot an unbelievably rare jellyfish called the Hydromedusa. You have to follow it to get some footage, no matter how dangerous the thing is. You will follow it into the deep ocean and try to film it down. Then a million other Hydromedusa come swarming in.

They electrocute your sub, which causes it to lose power and crash into the depths of the ocean. You try to get out of there, but you stumble upon an unbelievably rare discovery.

Episode 2: Fortress Of The Deep

Go to the right and break down that glass window in front of you. There’s a glyph on the wall directly in front of you that kind of looks like a shepherd’s crook next to a stick of butter. Click on it to film it down. Now head to your right. It’s a circular doorway! It’s locked. To unlock it, you must power all three parts of the door. So, let’s get to it!

Move into the area above you. The first part of the door is somehow powered by a goblin shark. To your right, you’ll see that the doorway is connected to a weird cage-type thing with the goblin shark icon on it. The shark has to go in there.

When you swim around, there will be a few small red fish which run away from you and hide. If you follow them to the hiding place, they will start following you. Get as many of those tiny fish as possible. Just explore every single nook and cranny to find as many of them as you can. Break all the glass windows you come across.

Also, you will come into contact with the goblin shark. Once it sees you, it’s gonna attack. Anyways, just dive down towards the cage you first saw when you came in. The goblin shark is crazy fast. It will only attack you once you run out of fish. If you get the goblin shark into the cage, the cage will automatically trap it, restoring power to one third of the door.

But don’t be so thrilled yet! Now that the shark’s taken care of, there are two metal artifacts in this area, and two glyphs to film down. One of the glyphs is an oval with two bumps, and the other kind of resembles a legless rhino. Once you’ve gotten those, it’s time to move on!

Revenge Of The Jellies

Go back down the way you came, and then go to the right this time. You’ll enter the jellyfish room. If you move down, you’ll see lots and lots of hydromedusa jellyfish.

Anyways, you’ll see lots of pink sockets all over the room. If you get close to the hydromedusa jellyfish, one of them will leave the group and follow you. Lure it to the closest socket and it will start powering the socket. This will often open doors to new compartments and stuff like that. You have to be careful with the jellyfish, because if it touches you, you will be electrocuted. If it floats out of view, you’ll have to start over at the beginning.

All you have to do is power every single socket in the area. That will open up the final compartment, which is located at the bottom-right corner of the area. The compartment has a cage that is extremely similar to the goblin shark one. Lure the last jellyfish into the compartment and into the cage while avoiding the electric eel. This will power another part of the door!

After that, you still have to film down two more glyphs and find two more artifacts in that room. So, don’t leave just yet. The two artifacts are located in the top-left and bottom-left compartments. One of the glyphs looks like a diamond with a circle in it while the other looks like the number “40.”

Now you’re done! To the next level!

You can click the intersections between the pipes to rotate them. Once you’ve fixed the pipe, you can click the big red button to jettison the fish through the pipes. If it works, you will power the third part of the door!

But wait, there’s more! There are two artifacts stuck inside some pipes. To get to them, you’ll have to rig the pipe system so that the right side of the room is connected to the pipe where the artifact is located. Then press the button so that the pufferfish is forced through the pipes and forces the artifact out. Do this for both artifacts.

You’ll also have to film down the final glyph, which looks like a square with a crooked line. Now you have all the artifacts and all of the glyphs!

The Most Complicated Lock Ever

The buttons around the image will light up. Click them in this order: Butter and crook, number 40, legless rhino, square with crooked line, oval with bumps, diamond and circle. Check the Mysterious Glyphs folder if you’re having trouble.

The door opens and sucks you in. Cam Jameson (the crazy guy from the first episode) tries to reach you, but receives a weird transmission in some weird language. You’ve completed the episode!

Episode 3: Out Of The Blue

After you went in, the door shuts behind, leaving you locked inside. Now, you go to the right of your screen, and keep going 2 times. When you reach the capsule room, go up and jump.

After you made your way across the jumps, you search around the room and find a green button with a red dispenser. When you press the button, push the ball towards a container. Then it displays a memory of the ship, picture by picture. Then when it’s done, it says ‘Emergency Power’. Now press the button on top to open the green door. Go to the first room and find another green button with a red dispenser. After that, it says ‘Life Support’.

A Shark on the Loose

You go back to the capsule room, and you notice the shark escaped. It went through a hole nearby, and it gets dark, then light comes again. You find another green button, you push it to the right and the shark will eat it. Keep going across and go through the loop. Do it again, but push the ball up. The shark will not eat it.

You will see a red Bug Bot coming and scanning you. It says ‘Find me. Find me’. Don’t follow it, and go back to the first room. There will be a door that opened up. Go through it, and now you will be on feet.

Go up and you see the Atlantis captain the collapsed. Click on his suit and it also collapses. Click the pink glowing touchpad and it displays the changing shape of the earth. And the place starts to collapse. Go back to the same door and it says ‘GO HOME. THANK YOU’. The Atlantis city now starts to go up to the sky and teleports you down back on cam’s ship. You have finally completed the island!

PPT – What is a Fish? PowerPoint Presentation