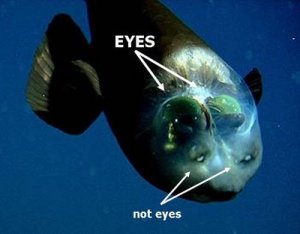 Well, that’s a strange fish… it’s almost like its head is…HOLY CRAP IT HAS A SEE-THROUGH FACE!!!! It has those sad little eyes, a pouty-lookin’ mouth and weird, greenish…brain lobes? Not quite. M. microstoma (a.k.a. “spookfish”), as other worldly as they seem, actually come from a place much closer than the alien planet you might suspect. It lives in the deep waters off the central coast of California, about 2,000 to 2,600 feet (600-800m) below the watery surface. To even see one alive requires a submersible, as they don’t survive long once removed from their native habitat. The image above was taken by an ROV (Remotely Operated Vehicle) by the Monterey Bay Aquarium Research Institute in 2009. That’s fairly recent, and we’ve only been aware of the existence of this species since 1939. Its “face” is composed of a transparent dome (apparently rather delicate) filled with some fluid. Now, the transparent head is odd, but not super weird or mind blowing. But why would it need that see-through dome in the first place? It doesn’t need to see out of it or anything, its eyes are at the front. Aaaaaaaaaaaannd this is where it gets weird.

So WHAT THE F@$% IS THAT!!!! Those are barreleyes. Eyes. In the shape. Of a barrel. Those things that you probably thought were eyes? Smelling organs called nares. Although not the only barreleye fish (family Opisthoproctidae), this is first we’ve seen in it’s natural habitat. It looks straight up to look for food (with it’s body horizontal), and then rotates its eyes forward as it turns its body upward to swim for the food source. So what do these guys eat? While we haven’t fully observed its eating habits, researchers hypothesize that it finds some siphonophores (jellyfish relatives), and steals food straight from their tentacles. Actually, that’s kind of badass. You can see a short clip of some Barreleye Fish here.

Note: I don’t own these images