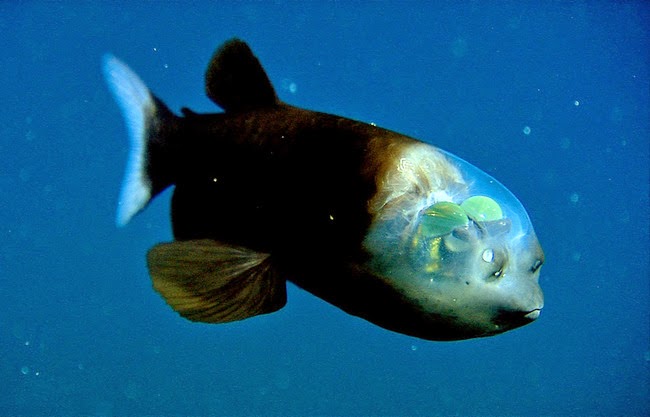 The Pacific barreleye fish is one the weirdest creatures lurking deep in the ocean. Named after its eyes that are literally shaped like barrels, the species’ most unique trait is the completely transparent head.

M. microstoma is the only representative of the genus Macropinna, belonging to the Opisthoproctidae family.

Although known to scientists since 1939,  it was photographed alive only in 2004. Old drawings and photos do not show the transparent head, as it is usually destroyed when they are brought up to the surface.

The species most distinctive trait is the transparent, fluid-filled dome on its head, through which the lenses of the eyes can be seen. The barrel-shaped eyes can be rotated to point either forward or straight up, looking through the transparent dome.

The mouth is tiny and most of the body is covered with large scales. Most caught specimens are 15 cm long, but they can grow to be at least 44 cm. The small mouth suggests that they are very precise and selective in capturing small prey.

They have large, flat fins which allow them to remain nearly motionless in the water and to maneuver with great precision.

The green pigments in the eyes may filter out sunlight coming directly from the sea surface, helping the fish to spot the bioluminescent light some jellies and other aquatic creatures emit.

They are oviparous (egg-laying) with planktonic larvae.


Video taken with the help of a remotely operated vehicle showing a Pacific Barreleye fish.

They are solitary animals that spend most of the time motionless, with the body in a horizontal position and the eyes looking upward.

Stomach examinations have revealed jellyfish and other cnidarian animals. However, the species’ visceral anatomy indicates a diet of mixed zooplankton, including both gelatinous and crustacean prey, small fish,

In low light conditions, it is assumed that the pacific barreleye fish detects prey by its silhouette. Researchers Bruce Robison and Kim Reisenbichler from the Monterey Bay Aquarium Research Institute (MBARI) observed that when prey is spotted, the eyes rotate like binoculars, facing forward as it turns its body from a horizontal to a vertical position to feed. Robison speculates that M. microstoma is capable of “stealing” small fish trapped in the tentacles of siphonophores.

what does barreleye fish taste like and how do you cook it?