This week’s fish is ultra cool, and  personally, it makes me wonder if it came from alien origin!

The barreleye fish,also known as the  spookfish,lives from about 400m – 2500m deep into the ocean. They have been found in the Pacific, Atlantic and Indian Oceans. The barreleye fish is believed to consume mostly jellyfishes and small zooplankton such as hydroids, copepods and other pelagic crustaceans

What you might first mistake as its eyes (just above the small mouth) are actually the fish’s olfactory organs, also known as nostrils. Believe it or not, the fish’s eyes are the green tubular objects that are pointing upward from within the transparent dome of the fish’s head.

Living at depths where sunlight from the surface fades to almost complete darkness, their tubular eyes are excellent at collecting light, allowing them to to search for faint silhouettes of prey overhead. While it was initially believed that their eyes were fixed in an upward position; that would have made it near impossible to actually eat they prey with no ability to see forward.

But you see guys, when living in the deep sea, being translucent is not unusual. Having tubular eyes are not new, either. So what qualifies this fish to be crazy weird is the fact that its eyes can actually rotate to whichever angle it wants!

“Using MBARI’s remote operate vehicles Robison and Reisenbichler were
able to view the barreleyes in the ocean between 600 and 800m.  The
found that the eyes of Macropinna can rotate within transparent
shield that covers the fish’s head, allowing it to look at whatever it
wants.  This transparent, fluid-filled shield that covers the top of the
fish’s head was unknown to science, i.e. existing descriptions and
illustrations do no show it.  Likely, when previous specimens were
caught in deep-sea trawls there were damaged or lost.”

Its eyes are like the most awesome periscope ever! In the deep, most animals hunt by looking up. They take advantage of what
little surface light is available to spot a silhouette of something above.
Having rotating eyes to see food above, then see it when it’s near the mouth
is a great adaptation.

But the awesomeness does not stop here. Apart from the amazing “headgear”, barreleyes have a variety of other interesting adaptations to deep-sea
life. Their large, flat fins allow them to remain nearly motionless in
the water, and to maneuver very precisely .
Their small mouths suggest that they can be very precise and selective
in capturing small prey.

Also, depending on what species you are looking at, they might have scales or
not. Their fins are mostly spineless (seriously, check out the
crystalline fins on the dried out specimen above). They have gizzards
like birds, and some of their organs even glow in the dark thanks to
bioluminescent bacteria. They even have some ‘mirror lighting,’ which is
like countershading on crack. There is much more to these fishes than
meets the eye, but the eyes are what everybody focuses on. 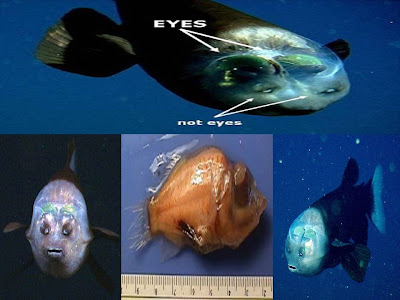 Do enjoy this video to know more :

Macropinna microstoma: A deep-sea fish with a transparent head and tubular eyes