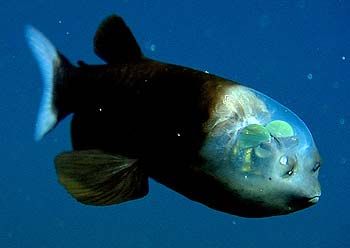 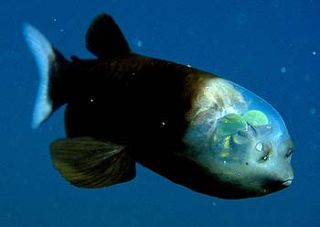 The barreleye (Macropinna microstoma) has extremely light-sensitive eyes that can rotate within a transparent, fluid-filled shield on its head. The fish’s tubular eyes, well inside the head, are capped by bright green lenses. The eyes point upward (as shown here) when the fish is looking for food overhead. They point forward when the fish is feeding. The two spots above the fish’s mouth are not eyes: those are olfactory organs called nares, which are analogous to human nostrils.

A bizarre deep-water fish called the barreleye has a transparent head and tubular eyes. Since the fish’s discovery in 1939, biologists have known the eyes were very good at collecting light. But their shape seemed to leave the fish with tunnel vision.

Now scientists say the eyes rotate, allowing the barreleye to see directly forward or look upward through its transparent head.

The barreleye (Macropinna microstoma) is adapted for life in a pitch-black environment of the deep sea, where sunlight does not reach. They use their ultra-sensitive tubular eyes to search for the faint silhouettes of prey overhead.

Scientists had thought the eyes were fixed in an upward gaze, however. This would make it impossible for the fish to see what was directly in front of them, and very difficult for them to capture prey with their small, pointed mouths.

Bruce Robison and Kim Reisenbichler of the Monterey Bay Aquarium Research Institute use videos from the institute’s remotely operated vehicles (ROVs) to study barreleyes off Central California. At depths of 2,000 to 2,600 feet (600 to 800 meters), the ROV cameras typically showed these fish hanging motionless in the water, their eyes glowing a vivid green in the ROV’s bright lights. The video also revealed a previously undescribed feature of these fish — its eyes are surrounded by a transparent, fluid-filled shield that covers the top of the fish’s head.

Most existing descriptions and illustrations of this fish do not show its fluid-filled shield, probably because this fragile structure was destroyed when the fish were brought up from the deep in nets.

Robison and Reisenbichler were fortunate to bring a net-caught barreleye to the surface alive. Over several hours in an aquarium on the ship, they were able to confirm that the fish rotated its tubular eyes as it turned its body from a horizontal to a vertical position.

Barreleyes, just a few inches long, are thought to eat small fishes and jellyfish. The green pigments in their eyes may filter out sunlight coming directly from the sea surface, helping the barreleye spot the bioluminescent glow of jellies or other animals directly overhead. When it spots prey (such as a drifting jelly), a barreleye rotates its eyes forward and swims upward, in feeding mode.

The findings were detailed recently in the journal Copeia.