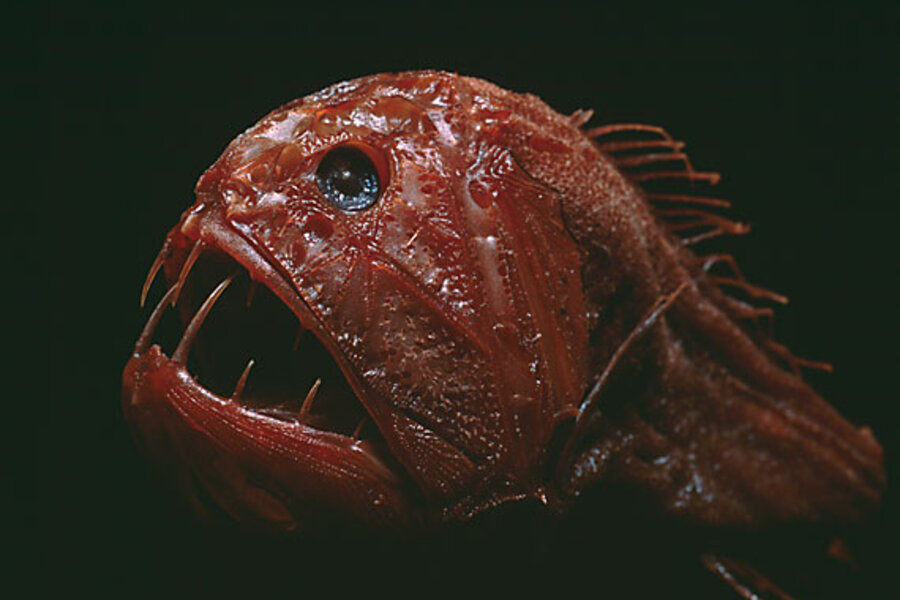 The 20 weirdest fish in the ocean

The common fangtooth, or Anoplogaster cornuta, is a small, deep-sea fish with some of the largest teeth in the ocean, proportional to its size.

The aptly-named blobfish is now in danger of being wiped out. The bloated bottom dweller, which can grow up to 12 inches, lives at depths of up to 900m making it rarely seen by humans. But thanks to increasing fishing of the seas Down Under, the fish is being dragged up with other catches. Despite being inedible, the blobfish unluckily lives at the same depths as other more appetizing ocean organisms, including crab and lobster.

An Oranda goldfish has a prominent hood, or wen, that encases its whole head except for the eyes and mouth.

A whitemargin stargazer lies half-buried on a reef off Komodo Island, Indonesia, waiting for a small fish to swim by.

The Asian sheepshead wrasse is from the Labridae family of fish and is typically found in China, North Korea, South Korea, and here in Niligata, Japan. Wrasses typically have jutting, thick lips and a unique jaw structure with portruding ‘foreheads’ and ‘chins.’ The Asian sheepshead is among the largest of the wrasses and feeds on shellfish and crustaceans.

The obese dragonfish is a deep-water-dwelling fish with bioluminescent capabilities. Photophores, or light producing organs, cover the fish in rows and below both eyes.

A male jawfish is seen with eggs in his mouth in the Philippines. After mating, the female jawfish gives the eggs to the male. The fish are known as mouthbreeders.

A harlequin jawfish in a burrow of Hatsushima Island in Japan is seen here.

The tassled scorpionfish in the Solomon Islands of the South Pacific is a venomous, carnivorous fish.

Squirrelfish swim near coral in the Bahamas.

Frogfish, seen here in Bali, Indonesia, are found in tropical and subtropical oceans and are a type of anglerfish. They use mimicry and camouflage to either hide from predators or look like a potential meal for their prey. They are scaleless and usually have unusual shapes and textures.

A young box fish is seen off Sulawesi Island, Indonesia. The fish are shaped like a box and are brighter when younger. As they age, they turn blue-gray in color.

Parrotfish are named for their beak-like mouths and jaws.

A bulldog stargazer is a type of fish found in Australia, Tasmania, and New Zealand. Stargazers have eyes on top of their heads and an upward facing mouth. The fish bury themselves in the sand and then leap upwards to ambush prey.

Coffinfish are deep-sea fish with a short bioluminescent lure on their first dorsal fin that dangles forward over the mouth.

A recently discovered fish named ‘psychedelica,’ which bounces on the ocean floor like a rubber ball, is shown in the waters off Ambon Island, Indonesia. The frogfish – which has a swirl of tan and peach zebra stripes that extend from its aqua eyes to its tail – was initially discovered by scuba diving instructors working for a tour operator in shallow waters. The fish, like other frogfish, has fins on both sides of its body that have evolved to be leglike.

An Indo-Pacific red lionfish swims in the Caribbean. More than 300 scuba divers have been certified to catch red lionfish in a race to prevent the invasive and voracious species from consuming all the young and small fish on the Cayman Islands’ famous corals reefs.

A camouflaged stonefish waits for prey on the bed of the Red Sea. Stonefish are the most venemous fish in the world and are dangerous to humans, even potentially fatal.

A red-spotted blenny sits in a burrow with eggs off Kume Island, Japan.

A pufferfish in Ryokuto Island, Taiwan, is seen inflated at night. Pufferfish are the second-most-poisonous vertebrate in the world. The fish’s natural defense is to inflate rapidly, filling elastic stomachs with water and becoming spherical to seem larger to potential predators.