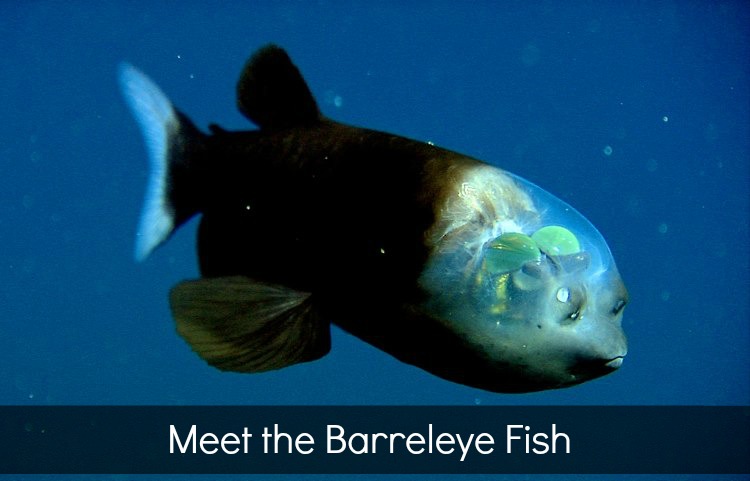 Guys and gals, I’d like to introduce you to this little deep sea beauty known as the Barreleye fish (also known as the spook fish). These creatures are normally found around the tropical or temperature waters of the Atlantic, Pacific, and Indian oceans. Typically, they grow to around 15cm (about 6 inches). Although it’s dome-like head looks like a mini biosphere, it’s actually the casing for its upward facing eyes.

It’s thought that the transparent dome around the eyes serves more than one purpose. First, the clear head allows more light into their big old peepers to enhance the detection of prey (like ultimate panoramic vision).  Second, it’s also known to protect their eyes from stinging cells. The stinging cells that threaten the barreleyes’ eyes can be found on the tentacles of Siphonophores (a kind of marine invertebrate) from which the Barreleye fish “borrow” their food… I say borrow, but I totally mean steal. Third, the eyes allow the fish to see in a number of different directions. The coolest bit? They can look straight up through their heads in order to watch for potential prey. In the image, their eyes are the green lenses within the dome. The dark spots that look like eyes, which you can see towards the front of the head resting just above its cute little mouth (where the eyes should be) actually act as smell organs. 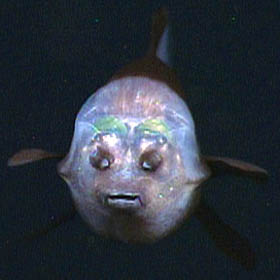 Their barrel shaped binocular-like eyes have adapted to serve them well in the deep ocean. Not only can their eyes can detect silhouettes from crustaceans above, they can also differentiate between ambient light and bioluminescent light emitted from other such ocean dwellers. Scientists used to believe that the fish’s eyes were stationary; however, now scientists assert they they can direct their eyes forward too. This fish was initially discovered in 1939, and at the time nothing much was known about them. This was mainly because, by the time their bodies were fished from the ocean, the change in pressure would damage their precious transparent noggins; however, much more recently they’ve been seen in their natural habitat with a less, well, dead appearance… and what a beautiful little creature this is.

… I say beautiful… That’s quite an intense stare its got going on!