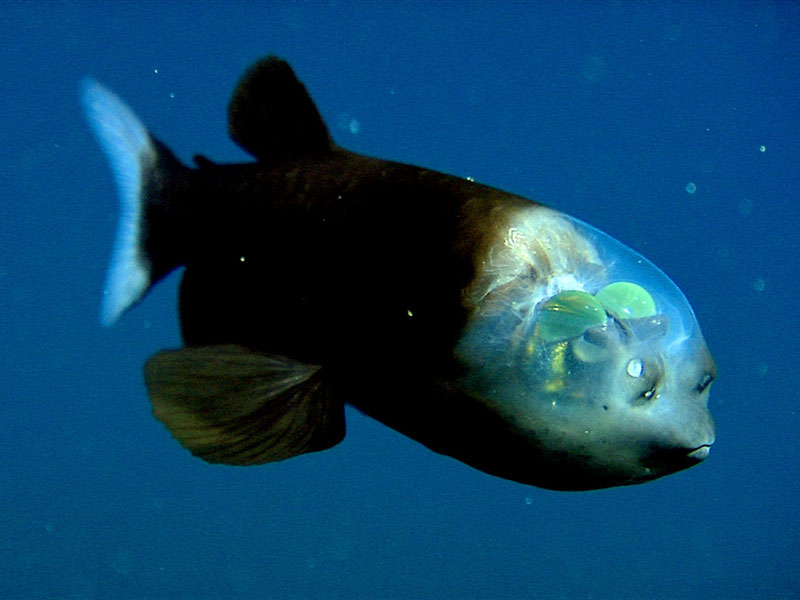 Macropinna microstoma, commonly known as Barreleye, are small deep sea fish found in tropical-to-temperate waters of the Atlantic, Pacific and Indian Oceans. What you might first mistake as its eyes (just above the small mouth) are actually the fish’s olfactory organs (the equivalent of nostrils). Believe it or not, the eyes are the green tubular objects that are pointing upwards from within the transparent dome of the fish’s head (which draws similarities to the glass canopy of a jet fighter).

Living at depths where sunlight from the surface fades to almost complete blackness, their tubular eyes are excellent at collecting light, allowing them to search for faint silhouettes of prey overhead. While it was initially believed their eyes were fixed in an upward position; that would have made it near impossible to actually eat their prey with no ability to see forward (where their mouth is located).

Researches at the Monterrey Bay Aquarium Research Institute (Bruce Robison and Kim Reisenbichler), who discovered the first live specimen of a barreleye fish back in 2004, put out a paper in 2009 showing that the eyes were able to rotate within the transparent shield.

While the species has been known to exist since 1939, a live specimen had not been observed. You can see it in the video below:

If you enjoyed this post, the Sifter highly recommends:

Fish Ponds and Fish for a Freshwater Pond.