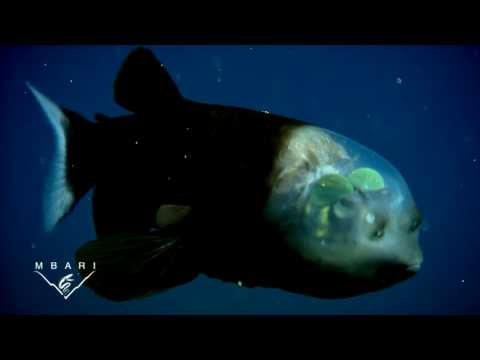 Another fascinating creature of the deep ocean. This one, the barreleye (Macropinna microstoma), also called the “spookfish” for obvious reasons, provides plenty of mystery for scientists to unravel.

When researchers at MBARI sent ROVs to deep waters off the coast of California a couple years ago, they believe they solved the half-century question of what this fish’s tubular eyes can do (the eyes are the greenish half-orbs pointed up, not the two dark spots on the front of the fish’s ‘face’ – it’s wild – watch the video). They also discovered a new feature of its remarkable head:

“…its eyes are surrounded by a transparent, fluid-filled shield that covers the top of the fish’s head. Most existing descriptions and illustrations of this fish do not show its fluid-filled shield, probably because this fragile structure was destroyed when the fish were brought up from the deep in nets.”

What will future research reveal about about this intriguing fish?

These 34 Rare Sea Animals Seem To Come From Another World… Amazing!

BARRELEYE – A Feast For Maggots