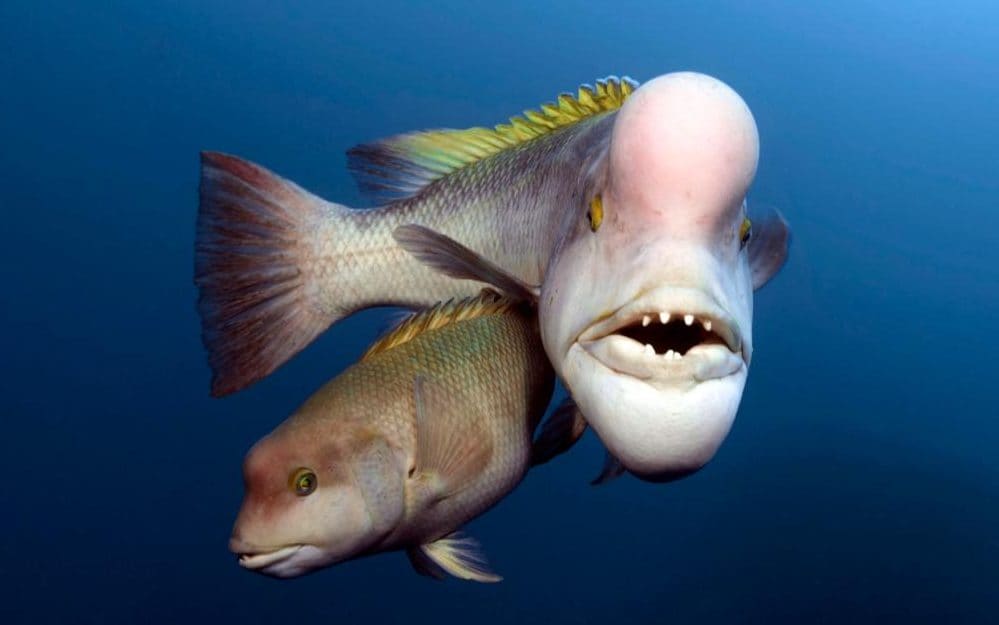 Mating is never easy when you have an unsightly bulbous appendage protruding from your head.

But the male Asian Sheepshead Wrasse has even greater problems to contend with.

The female wrasse is endowed with the extraordinary ability to unexpectedly switch gender, a change which not only scuppers any burgeoning relationship with the male but also creates another headache for him – a new love rival.

The gender-bending ability of the wrasse has been captured in detail for the first time for BBC Blue Planet II which airs on Sunday.

Scientists believe the female wrasse makes the switch because she can pass on more genes as a male, although it is unclear why some change while others remain female.

It is just one of dozens of filming and scientific firsts captured over four years by the production team who also recorded huge flying fish which snatch birds from the sky, boiling seas, and  armour clad octopuses.

Sir David Attenborough, who narrates the new series, said he was most impressed with new footage showing the efforts of the male anemone fish.

“There have been a lot of really important scientific discoveries,” he told The Telegraph.

“There’s a little anemone fish off the reef living in the sand that is surrounded by dangers but it finds refuge in the tentacles of an anemone, because it alone is immune to their poison.

“But the female has to lay eggs, and she can’t do that on the soft tentacles of an anemone. So the little male goes around trying to find something where she could lay safely.

“He finds an empty coconut shell, but the trouble is it’s miles away from the safety of the anemone. So he decides he’s going pull the thing all the way back. So he struggles with it, and the triumph on his little face when he does.”

The new series comes sixteen years after the original Blue Planet aired, and filmmakers have taken advantage of the latest marine science and cutting-edge technology to mount 125 expeditions across 39 countries, and spent more than 6,000 hours diving.

The crews managed to film animal behaviour that until now has been rejected as just sailors myths.

Mark Brownlow, Series Producer, said: “What’s exciting is we are working with scientists and we are helping them further their science.

“Often the logistics is too massive for them to independently launch their own expedition but by collaborating we work together.

“A really good example is the common octopus near Cape Town and when this octopus feels threatened it picks up stones, and shells on the seabed and wraps them around itself and it seems to be a protective coat.

“Not only does it camouflage but it actually seems to be using the shells as a shield and we filmed that for the first time.”

The team said the programmes were the most authentic ever, after the BBC Natural History Unit has faced criticism in the past for filming footage in zoos rather than in the natural world.

Sir David said: “To say that we are distorting natural history would be absurd. However we wouldn’t do that now, I don’t think, because we are being very very meticulous to be correct and not in anyway misleading.

“We do our best to be as honest as we can, and the Natural History Unit is extremely careful about constructing stories from too many sources.”

False Killer Whales travelling with a pod of oceanic Bottlenose dolphins off the coast of the North Island, New Zealand

James Honeybourne, Executive Producer, added: It’s very important to us that we are true to nature.

“We are very honest about all the techniques we use to create that, to tell as story. If you film something that’s microscopic you have to put added light on it, that’s just the simple laws of physics.